We have changed our project idea! Our new concept is to explore physical arousal and interpersonal touch. We aim to physically connect people who are physically apart, through arousal. This project has long distance relationship couples in mind.

The idea is that when a person touches themselves or becomes aroused, a physical arousing stimulus is sent to their partner.

Some precedents include Sonia Cillari’s work “Sensitive to Pleasure”

We have been exploring the following theories :

It Feels Like it’s Me: Interpersonal Multisensory Stimulation Enhances Visual Remapping of Touch from Other to Self

To achieve our goal of making a physical connection between couples who are far apart we intend to incorporate:

When I attended the 3D printshow in February in NYC, I was lucky enough to get to sit in on a lecture given by Manu Mannoor -one of the scientists at Princeton University who created a 3D printed ear that can “hear” radio frequencies beyond the normal human range. Using the 3D printing of cells and nanoparticles followed by a cell culture, Mannoor combined a small coil antenna with cartilage, creating what they termed as a ‘bionic ear’.  This type of work really opens the door for future biotechnological projects and reminded me of a lot about what we have been discussing in the digital self. The integration of biosensors in the body  presents a lot of ethical questions as well. 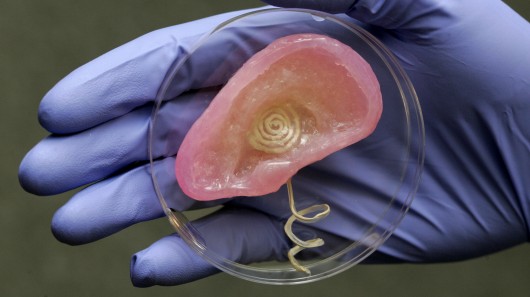 Also at the 3D print show, I listened to prosthetic designer, Tom Most talk about how 3D printing is revolutionizing traditional orthopedic and prosthetic practices. His methods combine traditional hands-on methods with digital / 3D print processes, creating a better fitting socket, which is lighter, stronger, and less expensive than the traditional methods of fabrication. I am particularly interested in how bio sensors can be used with prosthetics.

Some of  the research done at CNSI UCLA where Adam Z. Stieg, Audrius V. Avizienis, and James K. Gimzewski are working on simulating neuronal networks with nano silver strands. 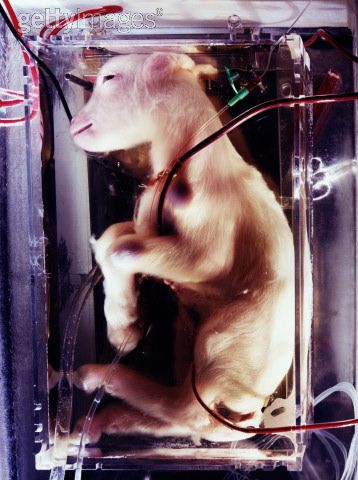 Yoshinori Kuwabara, a gynaecologist at Tokyo University’s medical department, removed the fetus from its mother by Caesarean section after 120 days’ gestation, about three-quarters of the way to its full term. He placed it in a rubber womb filled with artificial amniotic fluid, and the kid was delivered 17 days later.

Kevin Warwick is a pioneer of cybernetics, he spent his career working on ways to merge humans with machines, and he sees no reason why we should accept the limitations of our bodies as evolution has shaped them. This is a great article from 2007 in Wired that explores sensory substitution and brain plasticity full of amazing precedents. Quick Read

Cohen Van Balen and  biochemist James Chappell created a biobrick that modifies the Ph level of Lactobacillus bacteria making it possible to convert pigeon poop into soap. Even though this has not been tested outside of the lab because of EU GMO restrictions, it’s an interesting project that provokes new ideas in the realm of genetic modification architectural interventions.

Auger and Loizeau are a duo of amazing designers that dare to take their concepts to the forefront of relational inquiries. I recommend that you browse all of their work. This particular piece is about finding a potential mate based on scent alone.

Lucy McRae designs a swallowable perfume, this is a concept piece that is very well done and provokes innovation in the perfume industry about new ways of deploying scent.

I hope that you have been having a good week, and  that your prototypes are coming along. Remember that you must have a breadboarded circuit for next class, as we will be having the circuitry design intro next class. Be prepared by downloading Fritzing or EagleCAD depending on your level of intricateness you might opt for the latter.

Start searching and please share other precedents, and interesting work, that you have come across that  informs your personal or any other parallel project that is being developed in class.  Add an image of the precedent, a short description, and a link to the original page. Also, for those of you that need a copy of The Body Electric : http://aisencc.com/bodyelectric.pdf