Since the iMac was unable to hold a power on for a period more then a few minutes, the work around was to “fake it” using the shell and a raspberry pi to replicate a screen. The iMac was heavy and clunky to carry around. After making a trip to Parsons Electronic Green Space, a G4 – model A1106 (see pictures below),  was acquired. This made an easier and more compact shell for transportation. It also is more personal to the creative, it is rare to find someone who does not have an intimate relationship with their laptop today.

Step 1: Gut the computer insides. The first step taken was dismantling the laptop, removing all of the components that were not needed. 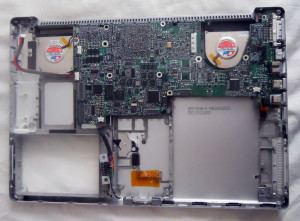 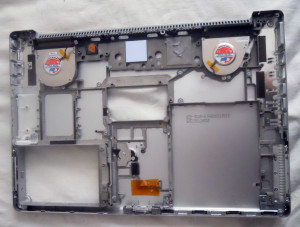 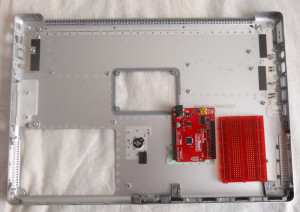 Step 3: Adding simple components and code tests. The component added was the small LED that lights the latch was added. (with a 330 resistor) This was programmed to fade in an out using sample code from the LED brightness tutorial (see video 1).  The next component added was the fan. The internal fans were 4 wires, and hard to adapt to the means needed, so an additional fan was added with temporary placement. The sample code from the blink tutorial was modified and incorporated into the LED breath code (see video 2). LED Test Video 1
http://youtu.be/eNmoN0S8Z9o

Step 4: Adding interactivity to breath. To add interactivity of the chest expanding upon inhale, a stretch sensor (conductive rubber) was used. One end was plugged into power, and the other plugged into Analog Out 1, a 330 resister and then fed into ground. The code was then modified again to include the analog read from the stretch sensor, and a stretch limit (for the exhale start value). The fan was moved to a permanent placement (so the casing could close), and the wires for the stretch sensor were fed through the USB slot.

Step 5: Adding fake screen with Raspberry Pi. The Rasperry Pi has not arrived yet, this will be updated after it arrives.

All code can be found at https://github.com/compagnb/DigitalSelfProject1